Rock Formations become a tourist attraction in Far North Queensland. We spend our days travelling around Far North Queensland taking care of our clients filtered water coolers. We love our job and some days are extra special like yesterday. It was a beautiful day in Far North Queensland and we had to make a trip to Port Douglas to install a cooler and service many of our other coolers in the area. After seeing something on Facebook about the rocks that had appeared along the coastal road between Cairns and Port Douglas, we decided to look out for them. It didn’t take us long to spot them, the cars along the roadside were an instant giveaway.

Wow, the sight was a lot bigger than we expected. Due to the dangers of just pulling over and having to cross the road we decided to wait until the return trip to stop, that way we would be travelling in the correct direction to pull over safely.

It really has become quite the tourist attraction, there would have easily been more than a dozen cars stopped with people taking pictures and posing with these man-made structures. Each day as more and more people stop the amount increases. Well, who would stop and not add their little piece of art to the collection. I think this is just wonderful. Everyone was smiling with sheer delight and posing with the beautiful natural beauty of Far North Queensland.

The Cairns post has written an article on the formations that are growing by the day, that is until nature decides they will be no more and removes them with a high tide or storm. They are located on the Captain Cook Highway between Pebbly and Ellis Beaches.

Here are some of the pictures that we took of the wonderful rock formations. Click on each picture to enlarge it. 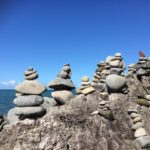 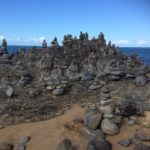 The Benefits of Sole Water

Can Bottled Water Give You Cancer?